Our weekly review of things that caught our attention. Some things new, some things aged. Just like a good wine. From easily digestible to the hard stuff.

Discussed on Twitter and the Systematic Investor Podcast: The illiquidity discount by Cliff Asness. The main question of the article and the ensuing discussion concerns the question if investors are actually willing to pay a higher price and accept a lower expected return for very illiquid assets.

I strongly suggest listening in on the podcast to follow the whole discussion.

This older Tweet of Jerry Parker caught my attention:

“A RenTech employee once said if it was up to him, stocks would have numbers attached to them, not names, so investors would be less likely to succumb to a story.”

It reminded me of a 2013 paper by Heiko Jacobs and Alexander Hillert on the alphabetic bias of investors. As “The Economist” very well puts it:

“Over the past century, all kinds of unfairness and
discrimination have been denounced or made illegal. But one insidious form continues to
thrive: alphabetism. This […] refers to discrimination against those whose surnames begin
with a letter in the lower half of the alphabet.”

The article is concerned with our humand tendency not to scroll much further than the first few pages in any document. For academia, the bias presents itself in the likelihood of

However, the authors of the article are more concerned with the general unfairness of alphabetic ordering in economics, politics and mainly financial markets. Based on CRSP mutual fund data and fund flows for NYSE/AMEX and NADAQ stocks the authors find “that a higher alphabetic ranking provides stocks with higher share turnover, investors with lower transaction costs, and firms among others with broader ownership”. Furthermore, the effects “are most pronounced for stocks disproportionately traded by individual or otherwise less sophisticated investors”.

Long story short: Instead of changing from names to numbers, shuffling might be a better solution.

We finish this week with a quick reminder by Dan Popescu:

Officially, decreasing the limit on ability of buying physicial anonymously is meant to battle money laundering. Risk averse Germans who anyway have a tendency to hoard gold might want to have a deeper look into exchange traded Xetra Gold where prices showed some interesting jumps over the last days: 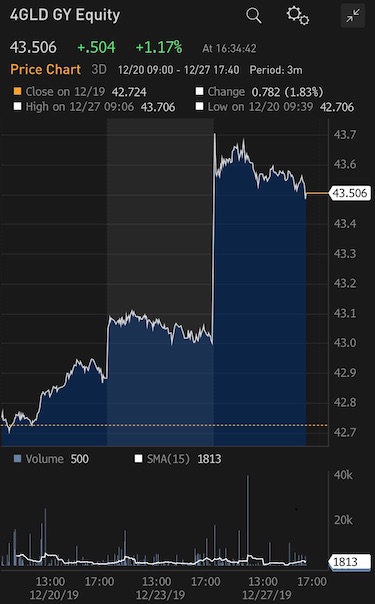 Maybe it’s time to go out and buy some gold …