We are all about liquidity at TwoQuants. However, when it comes to breakfast, we prefer steaming hot beverages and not things with little straw hats. For many European breakfast tables, the setting is similar and might include products for which actively traded agricultural commodity markets exist: bread (wheat futures), milk, coffee, sugar, orange juice. For the more luxurious breakfast setting, there is even Salmon futures trading at Fish Pool, though there is some discussion on its viability due to poor liquidity. You could even hedge your daily dose of ham by entering a lean porks contract , though I promise no guarantee for your cardiovascular health.

However, one product of daily consume is missing: tea. Although tea is one of the most consumed beverages in the world and its history dates back to 2737BC, tea has been conspicuously absent from the futures markets. It does not even have an established price index. However, tea is not the only market that doesn’t have a futures contract. One example that comes to mind, but hopefully not to your breakfast table, are onions. In the fall of 1958 the United States Congress passed the Onion Futures Act after a onion farmer made a fortune cornering the market. A good summary was given recently on Twitter by Sahil Bloom and inspired me to write a little bit about my favorite non-alcoholic beverage:

In 1955, an onion farmer from New York made a fortune cornering the market for onions in the United States.

By the time he was done, there were literally onions flowing through the streets.

Who’s up for a story?

The intent of the Senate Committee on Agriculture and Forestry was clear: given that ‘speculative activity in the futures markets causes such severe and unwarranted fluctuations in the price of cash onion […] a complete prohibition of onion futures trading in order to assure the orderly flow of onions in interstate commerce’ was necessary.

According to a study by Hilary Till (2015) 64 percent of financial futures contracts launched between 1975 and 1982 failed. Among these were local or redundant futures, as well as a few with insufficient commercial need (e.g. CPI futures). While the study shows that markets are not set in stone, the demise of some of these contracts might not have been a big surprise but rather part of the natural evolution of financial markets.

The factors determining the success of a futures contract can be categorized into three categories, which I will explore.

A priori, the larger the size of the cash market, the greater the attractiveness to hedgers and speculators. In this regard, the tea market is in a good position. The value of the world tea production shows an increasing trend and has been second only to coffee. Tea is experiencing high growth because of its popularity in countries like India and China as well as it’s health benefits. While global per capita consumption of coffee is expected to rise to 21.5 liters by 2021, tea consumption is expected to rise to 37.7 liters. Revenue in the Tea segment amounts to US$199,382.9m in 2020. The market is expected to grow annually by 9.8% (CAGR 2020-2025), see here. In contrast to coffee, tea is predominantly consumed at home, see the chart below (source: Statista).

The king of tea vs Heineken

In this regard, tea is a little bit problematic. Since I’m an avid tea drinker and my wife is kind of a collector (yes, you can age that stuff for 50+ years), let me give you a little introduction.

While common tea (non herbal) is sourced from the same plant (camellia sinensis), there is considerable variation in terroir and processing. From the same plant, you can harvest different parts of the leaves and stems, which leads to a huge variety in tastes and also price categories. In addition, you can process tea leaves differently by allowing for oxidization or fermentation. One example is Pu’er tea, which is traditionally produced in Yunnan Province in China and is often called ‘the King of Tea’. Its leaves are dried and fermented or aged. Over time the tea grows and changes in flavour – much like a fine wine. Certain vintage Pu’er teas can sell for up to US$10,000/kg. In contrast to coffee, which has to be consumed within a rather short time period after roasting, these teas get even better with time and thus increase in value.

Hence, standardization is tricky. However, since a large part of worldwide consumption is in black tea, which usually does not age due to it being dried in an oven, there is hope for standardization. Fun fact: what we know as black tea was originally called ‘red’ tea in China, if you hold a cup against the light you will understand why. Probably the same standardization is possible for the stuff that is put in tea bags. It’s a mix to achieve a consistent taste (meaning without any discernible profile) and if you drink it I really recommend switching to whole leaves. In my view it’s equivalent to drinking boxed wine or Heineken beer, but without the benefit of getting drunk at least.

From a producers point of view, there should be a need for hedging so that a new futures contract makes sense. High volatility in prices may generate losses for the market participants. If these losses are considerable, market participants will search for methods to mitigate the price risk.

If we look at commodity volatility between 1991 and 2017 based on data from a recent paper studying the Sri Lankan tea market, tea has a the third lowest annual volatility (16.81%) among the studied commodity contracts, while coffee has the highest volatility (35.84%). However, feeder and live cattle have lower volatility and are still successfully traded futures markets. While the future volatility of tea might be increasingly influenced by factors such as climate change, it is noteworthy that there are even approaches to grow tea in Europe (even in Germany), which could diversify production. 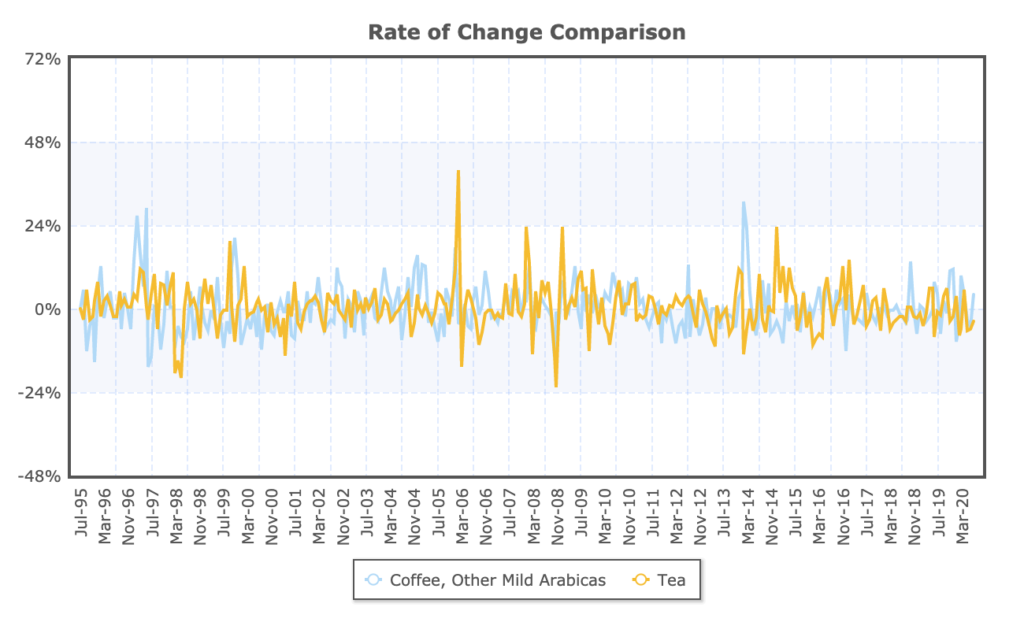 Last but not least, the design of the market infrastructure is important to allow for efficient trading. Open outcry markets are at a disadvantage to electronic markets due to higher transaction costs and an sometimes opaque price discovery process. Many tea auctions are still held in open outry fashion and the price of tea is not determined purely based on the demand and supply for a specific grade in an auction. Mutual understanding between buyer and seller are prevailing tea auctions, see this excellent paper of Sarah Besky (2016).

To summarize: while tea is an interesting commodity and you can enjoy it as a healthy alternative to wine (even for food pairing), its potential for financialization is still highly uncertain.

If you are on the lookout for diversification in this commodity, you might be better of digging into the storage of vintage Pu’ers. However, even more so than for exquisite wine, illiquidity of tea probably diminishes its hedging potential. In the end, returns are probably higher if you sample your collection with some friends – especially in times of crisis. There is even something called ‘the tea high’ – which gives you a ‘mellow clarity’ as Vice magazine describes it. In the end, my favorite part of a day of drinking tea is that it does leave you the opportunity to drink through your collection of vintage reds in the evening. Prost!

By the way: If you are looking for a real tea experience in Germany, make sure to check out Anmo-cha in Düsseldorf. For my favorite places in Hongkong and Singapore feel free to contact me via moritz.heiden[at]twoquants.com.