If you enjoy our blog posts, make sure to also check out “The Macro Compass” by our friend Alfonso Peccatiello. Alfonso has a wealth of knowledge and his recently launched newsletter quickly became one of our favorites.

In order to know virtue, we must first acquaint ourselves with vice.
~ Marquis de Sade

Two weeks ago, Moritz^2 had the honor to participate in a panel discussion at the Real Vision Festival of Learning. The event, which was hosted for a second time, featured an illustrious line-up of guests including Daniel Kahneman, Howard Marks, Peter Brandt, Mike Green, as well as some regular RV guests. If you are a RV subscriber, the videos are available here.

Two sessions we found particularly interesting were “How do I invest in virtue?” and “How do I invest in vice?”. It turns out that two of our own live trades fit into these categories. Instead of dealing with the complicated notions and dialectics of the philosophical concept of good vs evil, we decided to trade what we see as potentially profitable for our portfolio. Good risk-reward trades. It’s all about probabilities at the end of the day. Deep down we believe that the growing attention paid to sustainability topics makes sense. It will probably help to make the world a better place, but as we’ve learned during our ESG education: good and bad can cancel out in the portfolio context, so combining both trades leaves us morally neutral.

While we already touched on the topic of trading emission allowances (a “virtue” carbon trade) in the March edition of 2Q Focus (now available for free in our members area for subscibers), a particular vice trade has entered our portfolio in June: Thungela Resources (TGA LN Equity).

Never heard of them? Thungela is the newly listed thermal coal division of London-listed Anglo American (AAL). Early in June, TGA was spun off from AAL to improve AAL’s valuation and ESG score in the current coal-averse investing environment. Anglo American is a diversified miner and in fact the world’s largest producer of platinum. It’s a member of the FTSE 100 index, and the 274th -largest public company in the world. Thermal coal is the fuel for around 40% of all electricity generated globally today according to AAL’s company website. India’s and China’s reliance on imported thermal coal is expected to drive continued demand growth in the long term. And yes, thermal coal is super vice. It’s basically a bad thing at each stage of its life cycle, polluting the air, the water, and the land. The burning of coal is responsible for 46% of carbon dioxide emissions worldwide according to the IEA and the World Bank. Writing about trading in one of those stocks already makes me feel like one of those merchants of death.

Maybe that’s what AAL thought. Or maybe they just wanted to improve their ESG rating to increase their chances of being included in some of those ESG indices and investment strategies, that are now en vogue and where people want to put their money based on the hope it will have an impact and help mitigate the slow and painful death of rising sea levels, extreme temperatures, and ever more frequent natural disasters

There’s a concerted global effort to reduce investments in coal power projects and other polluting industries. An ironic result of that effort is a reduction in competition for established fossil fuel companies such as Thungela. This could put thermal coal producers (and other fossil fuel firms) in a sweet spot while the transition toward greener power is underway. It will very likely take decades to wean the world off coal. Until then, supply is already shrinking due to a lack of funding and established players may reap the benefits. While Thungela has not been a solid earner in the past for AAL, TGA promised 30 percent of cash flows as dividends. FactSet has cash profits falling from $546m in 2018 to a loss of $65m in 2020, while the gross margin has fallen from 41 percent to 16 percent in the same period.

Firms don’t pay 30% dividend yields if the business isn’t booming. That’s also what Broker Liberum thinks. Their research division estimates that the fair value for the shares lies somewhere between 230p and 490p.

Anyway, something interesting happened on the day the company was listed. We are not experts on pricing IPOs, but consensus on the street was that the company’s IPO price should have been around 150p to 180p (we actually asked a few analysts). On their first day, the stock opened at 150p and immediately tumbled to 110p before recovering intra-day and starting a nice upwards trend over the next days (it’s now at around 211p). What happened? Well, Anglo shareholders were handed one share of TGA for every 10 they held in AAL. So, why did many of them dump the stock right away? 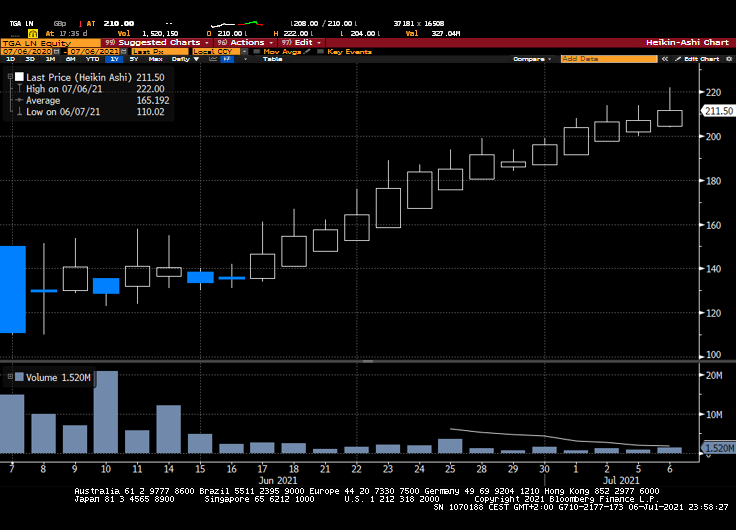 If we look at the ownership structure of AAL before the spin-off (image below)(, the biggest owners are passive funds and large institutions. 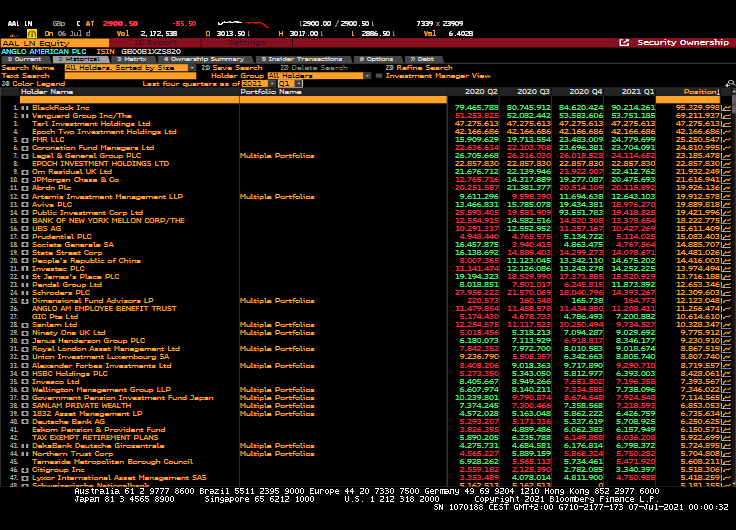 Our suspicion is that many of those have mandates that ban them from investing in coal companies. Besides the environmental impact, it’s the financial risk that’s associated with a rise in regulation that potentially drove them out of Thungela.

Next to the environmental impact, passive investing also plays a big role. We can look at the current ownership structure of TGA (image below) and immediately see that Vanguard, the second largest owner in AAL, is nowhere to be found. This is due to the fact that most of the Vanguard funds that held AAL were either MSCI World or FTSE trackers. The same holds for Blackrock. 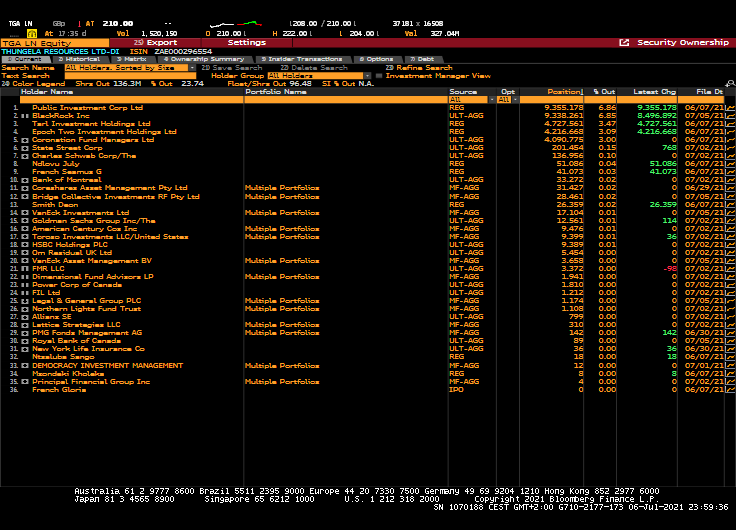 Hence, these passive funds dropped TGA because it doesn’t qualify for the bigger indices. AAL on the other hand does. Some sources we found mentioned that due to the nature of the spin-out, Thungela should still have a spot in the index according to the FTSE rulebook. Ownership data paints a different picture though. Blackrock’s and Vanguard’s passive funds which are still holding Thungela are mainly theme-driven investments (Metals & Miners, Global Materials etc.) or more sector-focused MSCI trackers. Anyway, the quarterly FTSE review will happen at the end of August, with the market capitalization cut-off being the 20th of August. We will see if additional selling pressure can be witnessed, but it looks like the dumping happened immediately after the spin-out.

Of course, being the degenerate gamblers well-informed investors we are, we bought TGA on spin-out day at around 115p after selling pressure receded. While we have no long-term view on coal miners, we based our trade on the assumption that there are still buyers for a business that mines the commodity for an industry supplying 40% of global energy demand.

We are still in that trade, but not looking to be long-term investors in a coal mining company. But the trend is up and share continues to rise, i.e., right now is not the time to exit the trade.

Why do we write about this? First of all, the trade illustrates the many aspects of a trend toward sustainable investing. Virtuous firms might be rewarded, but due to the interplay of a firm’s ownership structure, index rules and actual profitability, attractive opportunities can (and do) arise.

Second, a similar situation is already in the making. Australia’s AGL Energy Ltd., Australia’s largest electricity generator and carbon emitter, is planning to spin off its coal unit by mid-2022. The company retaining the coal plants will be called Accel Energy and each shareholder of AGL energy will get a share of Accel Energy. Again, large institutions and passive funds are the main shareholders. While the final impact might be different from Thungela due to differences in ownership structure and hence different focus on sustainability, similar trading patterns might emerge. Maybe we will have another chance to get our hands dirty. #happytrading 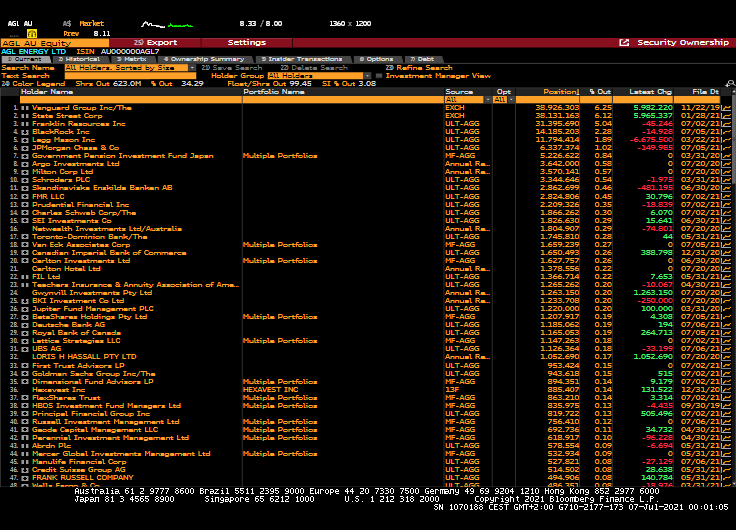