Footprints of a Former Professional Player

“It’s hard work. Gambling. Playing poker. Don’t let anyone tell you different. Think about what it’s like sitting at a poker table with people whose only goal is to beat you, take your money, and leave you out back talking to yourself about what went wrong inside. That probably sounds harsh. But that’s the way it is at the poker table. If you don’t believe me, then you’re the lamb that’s going off to the slaughter.” –Stu Ungar

My name is Antonio Catalano (picture). I’m a quantitative researcher and self-taught Python programmer who lives in Italy. I have an academic background in finance and know the two Moritz’s because we work together on quant research, coding and developing systematic trading strategies. Prior to my interest in quantitative trading I used to be a professional poker player and poker coach, travelling the world to play live in casinos and online. I played live poker in Las Vegas, the Philippines, Slovenia, Malta and Macedonia. 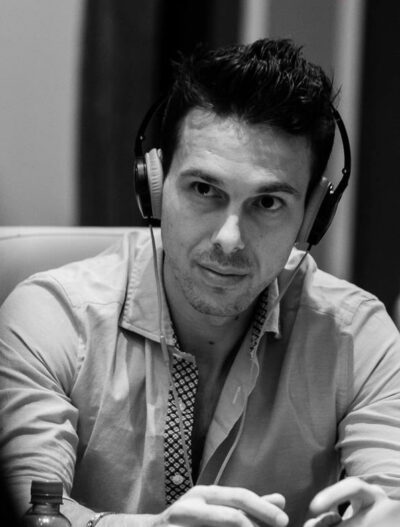 Since many successful traders have backgrounds in games of chance such as blackjack, poker, or backgammon where skill plays a role, I thought it would be a good idea to write about my experiences in the poker world and the lessons I learned from it.

In simple terms, trading and poker share a common goal. The goal is to make profitable decisions in an environment of incomplete information.

There’s one important difference though. In finance and markets, the unknown unknown (i.e., Knightian uncertainty) is an important component of the “incomplete information” expression; however, in poker the risk is always quantifiable, which is why one could say that poker is devoid of “black swan” events. Nevertheless, the consequences and by-products of trading and poker are remarkably similar. Expressions such as money relationship, risk propensity, stress, resilience, turn mistakes into lessons, hunch, cut your losses and so on are present in both worlds.

Poker players, like traders, experience excitement and depression, satisfaction and frustration, confidence and doubt. I experienced all the above during my poker career, and sometimes all of them in a single day. I felt very smart, only to feel very stupid a few moments later. I played great hands, followed by terrible ones. I experienced the joy of “lucky sessions” where nobody can beat you, but also the emotional struggle associated with “unlucky sessions” where you don’t win a single pot no matter what you do.

Like trading, poker is a journey – but not a lonely one. Poker players go hand in hand with their randomness “mate” in the same way traders go hand in hand with their “noise” mate. As a poker player you can increase the expected value of your payoff, you can decrease the variance of your payoff, but unless you play the session you will never know how it ends. The next session might turn out to be the best session of the year, or a total disaster. But because it’s impossible to know this in advance, you need to enter and finish that session. In other words, you must embrace the lack of total control.

We’ll now address some interesting questions by giving a high-level summary of this complex and fascinating game, but without simplifying the discourse too much:

Ideally, by reading this article you should feel an increasing sense of curiosity toward the topic and, at the same moment, a little bewilderment.

There are several variants of poker, but here we’ll talk about the form which I played professionally for many years, both live and online: The No Limit Texas Hold’em (NLTH) cash game. In what follows I assume that the reader knows the basic rules of this variant of poker. If not, you can read about the rules here.

What poker is about

Not considering the rake, poker is a zero-sum game of incomplete information with multiple decision rounds. The rake is the fee which the poker room, live or online, receives at each hand. It’s like a trading commission.

Technically speaking, poker is a non-cooperative Bayesian game in which the winner is the one who makes the fewer mistakes. At each decision round the player must make the move that maximizes the expected value (EV) of the payoff given the information available at the time. However, because the available information is incomplete and thus only partial, the resulting payoff is a function of several random variables (RVs), including the hidden cards of the opponents as well as the board’s cards which remain to be drawn from the deck. So, the payoff itself – being a function of various RVs – is a random variable, too.

The hidden cards of the opponents form the so-called opponent’s range while the potential cards that are still hidden inside the deck – combined with the players’ cards and the cards already drawn from the board – form the so-called players’ equities. The hidden cards of the opponents (which are estimable) and the cards which remain to be drawn from the deck (which are non-estimable) form the unknown cards. Hence, if the unknown cards represented a RV named X, the payoff at the end of the hand would be a random variable g(·), function of X.

As a matter of fact things are a little more complicated than this. Let’s see why.

The payoff of a player is a complex function which doesn’t depend on the unknown cards only. It also depends on the action moves of the other players and the player’s own action moves. Those actions are functions of the following: opponents’ actions (past and expected), unknown cards (RVs), skill and relative positions (deterministic).

The action of each player can be represented by a bivariate vector of the type (move, bet size). In other words, each action is identified with a specific move (i.e., bet, call, raise, check, fold) and a specific bet size (0 if the move is check or fold). Hence, poker can be viewed as a game of actions where each action increases the amount of available information about the opponent’s range and where cards are only one of many components.

A good poker player aims to make the action that maximizes E[P(·)] in each decision round, where E is the expectation operator and P(·) is the random variable payoff that depends on the player’s own action, past actions (deterministic variables) and future actions (random variables).

This is the end of part 1. In part 2, which will be published in due course, we’ll take a deeper dive into the game. Subscribe HERE to ensure you don’t miss it.