Views on Bitcoin – Part I

By now you may have read about our Bitcoin Cash & Carry trade, which is a non-directional trade aimed at exploiting the funding premium implied in Bitcoin futures markets. However, we are convinced that holding a directional long exposure in Bitcoin – maybe in addition to a Cash & Carry trade – is an essential portfolio position in today’s market environment.

Below are our random (and not-so-random) musings on Bitcoin which explain how we arrived at our line of thinking. This is part one of a two-part series.

I’m on the record since 2018 stating that “having a long position in Bitcoin is much less risky than staying on the sidelines.” Reading this you’ll probably think this sounds wrong – and maybe it is – but I think “this time it’s different.”

I’ll explain why, but let’s start at the beginning.

Bitcoin came about in 2009 as a novel, blockchain-based cryptocurrency. As to who’s behind it and who invented it, all one can say is that the Bitcoin whitepaper which explains how Bitcoin works was authored by one Satoshi Nakamoto, a presumed pseudonym. Satoshi Nakamoto solved the double-spending problem associated with digital currencies on a peer-to-peer network and shared his solution with everyone interested in it at the time – free of charge. Because of this there’s no for-profit Bitcoin company and merely a protocol that is agreed upon by all people who use Bitcoin.

Bitcoin is not the only digital currency around. Today, there are probably more than 1,000 coins in existence, most of which have been designed to do something else than Bitcoin, e.g., stablecoins such as Tether or tokens using programmable blockchain technologies such as Ether. All that aside, Bitcoin is – and always will be – digital currency #1, which goes a long way since blockchain-based technologies require acceptance and participation.

How large is Bitcoin? To be honest, it’s tiny. The market capitalization of Bitcoin is around $200 billion, and the market capitalization of all digital currencies is around $350 billion. That’s “a drop in the bucket” when compared to bond markets, equities, commodities, and so on. It’s also part of the reason why Bitcoin is such an asymmetric bet in my opinion. Let’s leave the technicalities (S2F, the cap at 21 million coins, etc.) aside for now and imagine that the price of Bitcoin increases to $100K. If (or maybe when) this happens, the market capitalization of Bitcoin will be around $2,000 billion ($2 trillion), and that’s a number that can no longer be ignored by institutional investors (pension funds, etc.). They will be forced into the market. It’s going to be very hard for them to say “I don’t care” and not caring will become impossible if Bitcoin’s market capitalization approaches that of gold ($9 trillion). Thus, there may be a squeeze, akin to being short a call option (naked). In addition to holding long positions in low and negative yielding debt instruments denominated in devaluating currencies (funny-looking paper), these investors will need to demonstrate their responsibility toward their clients by being long Bitcoin. That’s rock’n roll for Bitcoin. If Bitcoin gets accepted as a storehold of wealth in the same way as gold (digital gold), its price would be around $500K per coin using $2K as the price for an ounce of gold.

Bitcoin returns are also rock’n roll. It’s essentially the most volatile asset in the world, and it’s correlated with: Nothing.

Let’s look at some numbers and put Bitcoin in context with today’s markets. 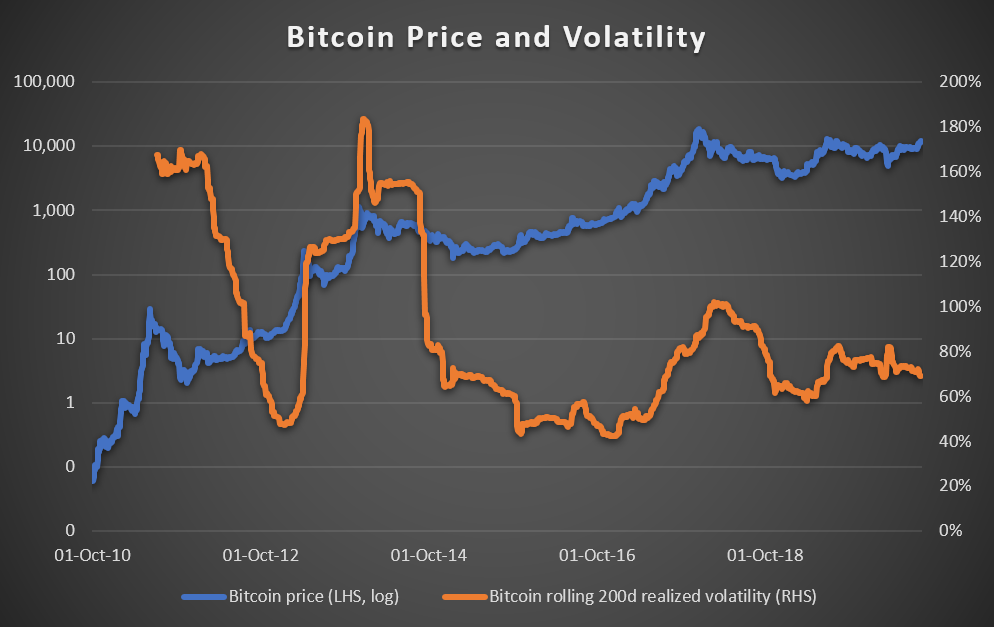 In terms of the macro environment, central banks’ balance sheets are growing at a rapid pace and everyone with a pulse must realize that their actions are meant to debase the purchasing power of currencies. Against this backdrop it is not surprising that people become interested in alternative currencies. However, alternative currencies such as Bitcoin could mean a huge problem for the central and regular banking systems of the world, as their core idea is to circumvent these systems and their governments.

It will be hard for governments to stop this. Severe taxation is an option, but suppressing Bitcoin is a tough choice. If one government declares it illegal, there will likely be another country that still allows it. It’s the usual country vs. country arbitrage. I think the genie is out of the bottle now. And it’s not going back in.

But back to macro. Interest rates are near zero or below, and I cannot see a scenario in which bonds will not lose value in real terms. My view here is on the next 5-10 years. Bonds may become a riskier asset class than equities, as long duration bonds suffer during inflationary periods while equities, at least to an extent, incorporate rising inflation in their underlying businesses. This may very well throw a spanner in the works of the 60/40 portfolio and the risk-return statistics which underpin such portfolio – statistics and premises which have become accepted wisdom by many. It could soon be “game over” for risk parity and 60/40.

Bitcoin could nevertheless thrive in such an environment. It trades 24/7, has never been bailed out, and isn’t manipulated by any central authority.

There are (as always) a million things that could go wrong. It’s the same with all trades and essentially all decisions in live. Nothing is 100% certain – not in markets, not in live. We must accept that and, therefore, size our bets appropriately. Bitcoin is such a bet. It’s an asymmetric, positively convex bet that’s worth taking – especially today.

What’s the downside? Bitcoin goes to zero, or close to zero, or you lose your keys, etc. That’s all possible, but you must frame these risks in relation to the upside potential of the bet. The upside? Nobody knows how high the price can go, but I think it’s fair to say that it could be multiples of where it is today. That’s the asymmetry – it’s like a call option. Back to my earlier statement of “the risk of not being long is greater than the risk of being long.” I really believe this is true. Can you afford to not participate in the upside if Bitcoin goes 10x, 20x or whatever-x, knowing that your downside is $11K per coin? Think about that.

To be continued with part 2 in due course.